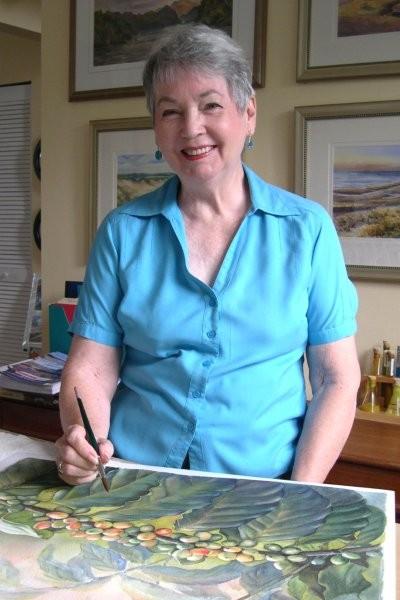 Judi was born and educated in Suffolk, England, where she won a scholarship to the Ipswich School of Art, and embraced a wide range of subjects in a very structured environment. She has studied with many Ontario artists and finds her inspiration from nature, and many of her own photographs taken on travel in Canada and England.

Since May 2000 Judi’s work has been accepted into twelve juried shows and twenty-one group shows and she has presented her work in seventeen solo shows in the Region of Waterloo.

Currently working mainly in watercolour, Judi’s subjects include landscapes and florals, often referring to her own digital photographs and/or plants she has grown. Water frequently appears in the landscapes, and some of her work is done on Masa paper. She experiments with the different ways of mixing paint, paper and water, sometimes with unexpected results.

Judi and her husband, Jim, moved to Comox, British Columbia in May of 2006. In Comox she has re-established her studio and joined several local associations.

Judi is available for instruction of individuals or small classes, either in her studio or elsewhere. 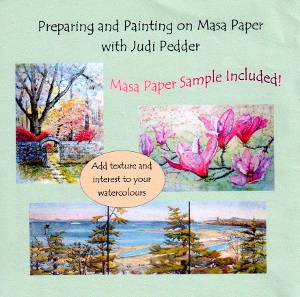 Half price while supplies last!

“I like your DVD – it is everything you said it would be and very informative”
Barbara, Virginia

“I have enjoyed your instructions – you have such a nice manner of explaining your process, and your work is lovely.”
Candace, California

“Your DVD arrived, I’ve already started to watch it and look forward to using my masa paper. It’s very nicely put together and a great presentation on the cover insert with high quality photos, good font, nice proportions, good colours etc. I was a graphic artist for many years and give it an A+. And what a good idea to include a piece of masa paper so people know what to buy.”
Anna, North Carolina